Hi everyone, we are now in April, for sure the temperature has risen and we are promised to be in 20s by the end of the week.

In this weeks garden hive inspection, all three queens were located and the colony is building nicely. The queen lays 1500-2000 eggs a day, so the population is definitely increasing. I could see brood and eggs and grubs (know as bees at all stages bias). The wings of the emerging nursing bees looked great. Although there is some sign of varroa (with a few wing deformation). But as the hive relies on the health of the entire colony. Every thing otherwise looked good. They will reach full capacity in July.

I have put supers above the brood chamber. Because of the rain we had there was a honey flow on, although majority is used to feed the colony. We did have a loss of a colony due to starvation. There was also some sign of mould causing a problem with the bees. With all the damp and the long winter, the bees have had to generate heat within the hive to keep warm and as a result a build up of condensation occurred. So a great bit of cleaning and sterilisation has gone on to make sure the hive is clean for the bees.

The warm weather should erradicate this problem.

The bees are flying and its great, as always to see the pollen on their legs as they bring in this excellent source of protein to nourish the queen and nursing bees.

All the honey I had in stock is now gone and we won't be looking to extract until August 2018.

Well when I originally wrote this blog in April, I thought this would be a plain sailing year, as far as colonies go. New Queens, no sign of swarming and they were building nicely.

Since then however we have had emergency queen cells appearing in the hives of two of the colonies in our garden and 1 in the offsite apiary. As a result we have had two swarms in two days.

The first was last Sunday. It seemed like a virgin queen emerged from the queen cells and flew off with half the colony. Which to be honest was a bit full. She lays 1500-2000 per day and they take at least 28 days to hatch out, once they do then there is a large population, not enough room within for her to lay eggs, put away stores and space to manoeuvre. Getting the time of this internal hive activity is crucial and I seemed to have missed it some how.

The next swarm was three days later. I went through the first time to check what was happening and had left QC and was thinking that day, I wonder if we are going to have anther swarm. They did, over the back, but the neighbour wasn't about and I think because I had clipped the wing of the queen that they came back into the hive. So I am grateful, for one less conversation about the inconvenience is caused, but having bees in your garden.

Oh well, I learn something new every year. But the basic rule if you see queen cells and you got a good queen destroy it, then 3 days later do the same and so on until they get the hint that we don't want them to swarm. We need a good populations of beens, to nurse, to clean, to feed, to be century and to forage.

However, we have already extracted1131 pounds of honey, and we haven't finished the season yet. Yes, we extracted in Spring. I wasn't expecting that.

So if you love honey and you are a hay fever suffer or you just want a jar of my liquid gold, please contact me Arlene arlenesbreadandhoney2016@gmail.com. 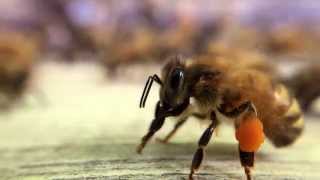